Falling in Love at (with) a Coffee Shop

No, this is not a love story about a boy who meets a girl in a coffee shop, then fall in love, then live happily ever after. I have yet to hear a story like that in real life, apart from this amazing song by Landon Pigg, which doesn’t really count

This is  about why I fell in love with coffee shops. Yes, most of them are over-priced, as Joel B always likes to point out. But the truth is, coffee shops have stopped being purely about coffee since the proliferation of Starbucks-es, Figaro-s and the likes. And personally, these are the reasons why I prefer to hang out there than any other place in the world (well, except my house and the office)

I go there when the office or my house becomes oppressive. Don’t get me wrong, I love my officemates and my housemates to death, but there are just days and moments when you just need to get away and be alone and be anonymous and just be somwhere other than there. When I need to work, I bring along my trusty laptop. When I don’t need to work, I just bring a book or a notebook and pen. I sometimes don’t tell anyone where I’m going just so no one will bug me. Or sometimes, I just tell them because I know that after an hour or so, I will crave their company. Eventually

I go there when I want a good cup of coffee. I’m sorry, but I truly believe that instant coffee is not real coffee. Nothing beats Starbucks’ Sumatra or Figaro’s Amaretto or even the unamed Kitchen of Cakes and Coffee’s brewed coffee. The smell, the texture, the scalding hotness as it goes down my throat, and the eventual jolt as it enters my system. Those are things that instant coffee (no matter how “now” it is) can never give me. And yes, sometimes I do give in to the inevitable iced drinks and frapuccinos, but brewed coffee is still the real deal

I go there when I want to meet up with long lost friends, or even everyday friends. It is quiet enough that you can hear each other talk, unlike if you meet up in a mall or that thing called a bar, which will never ever be conducive to intimate declarations. And yet, it is public enough that you can laugh out loud without incurring the wrath of the people sitting next to you, unless they are the kind that attempt to ‘study’ in coffee shops. Honey, this isn’t a library, so better bring earphones or something

And yes, the plan one day is to have my own coffee shop, where people can do all the things I mentioned above. And maybe, there might even be a love story in there somwhere

And then there are the purists… 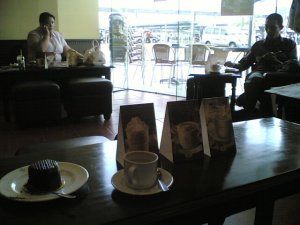 a gazillion coffee cups ago

I am a storyteller, an observant bystander and most of all a coffee drinker. The whole coffee experience is for me an amalgam of unexplainable emotions and adrenalin enough to fuel me for whole day.  Like coffee, the culture has evolved into a rich web that cuts across all ages, cultures, classes and interests. Gone are the days when coffee would be synonymous to stiff lipped oldies, pardon the name calling.

Ironically coffee makes me sleepy (but that is another story altogether involving lactose intolerance and bathroom episodes that you do not want to hear of) but I have a genuine love of café’s and the whole gamut of sights and stories created there. When the first Starbucks branch opened in Manila, my best friend and I spent the whole day in mindless coffee sipping and making remarks at each and every person that came in until we finally called it a day at around 3am.

When I look back, it is such a wonder how the humble bean is now larger than life and for some is actually the source of life. To open the coffee diaries is like opening a never ending folder of downloaded movies, an mp3 player of 12000 songs, and as many permutations in google as possible.

Looks for the perfectly brewed coffee.  No distractions, well maybe once in awhile (yes, cream and sugar are seen as an anomaly of sorts) He likes his coffee strong, probably to get himself ready for the long day ahead. Sipping coffee pure and black as night is to him like an orgasmic experience that momentarily creates the disconnect to the world and gets him closer to a higher plane. He may be in a café or more often than not in a crowded forgotten part of the city where his inner circle is as defined and deeply ingrained as the distinct brown round stain that is left in its wake.

May or may not be a coffee aficionado but thrives in the company of coffee drinkers and revels in the hidden stories that are either divulged to her or crafted right there and then through keen observation. The laugh is distinguishable, the constant darting look is unmistakable, the constant chatter, aahhs and oohs is a staple.  Coffee selections are usually confined to non fat concoctions, frappucinos are considered treats if the two week diet is followed to a T.

Students and professionals who wish to get cerebral work done and yet find the slow constant hum of comings and goings and the faraway laugh of the coffee socialite stimulating. They make up more than fifty percent of those who stay in café’s much to my frustration sometimes. I cannot count the number of times that I have enviously stared at a comfy couch or that Starbucks spot upstairs in Tomas Morato with the green reading lamps wanting to blurt out,

“uh how many hours have you spent here already as opposed to the number of cups you have consumed?” Ha! That would have warranted me a good “if looks could kill stare” or a flying projectile which to them is aptly called a medical text book.

This is me. Those for whom the term coffee break is synonymous to prison break. In the din of all the noise in our individual lives and day jobs this is the only escape to sanity. Topics vary from trivial to serious life changing matters all drawn out by coffee in various blends and flavors. I have seen how my friendships evolved because of coffee breaks, some turned to romance, some are episodes of betrayal that led to a year of silence, some opened up secrets that were otherwise tightly kept which for me became a rich trove for future black mailing (you know who you are so beware! Just kidding…) This time of the day for me is the most anticipated, the highlight which makes everyday just a little bit more tolerable.

This cafe play continuously unravels and characters develop as new personalities come in. Unfortunately from where I am, my cappuccino is calling to me in a surprisingly slightly thick irish accent which leaves me no choice but to leave this entry hanging, heave a deep sigh and sip, sip, sip…

Lorelai Gilmore (of the now deceased TV show Gilmore Girls) said it best when she uttered those three words in quick succession and much conviction. Yes, I am one of those whose drug of choice is caffeine. If others can’t stop puffing on cigarettes or gulping down Red Horse Beers, you can’t take me away from my coffee beans

And I don’t mean the instant coffee that you can buy for 5 pesos in 7-11. Instant coffee just doesn’t have the “zing” that I’m looking for. Whenever I drink it, I feel like I’m drinking Milo or Ovaltine, which may be nice, but is just so bland and uninspiring. I only drink it when I’m broke and have no choice anymore

And I also don’t mean the blended cream coffees (frapuccinos and the like) that cause diabetes, obesity and nausea for those who are lactose intolerant. Yeah, I have them every once in a while, like when I’m really stressed, but to drink that everyday is just plain insane. Can you imagine how much sugar and calories your body is taking in?

What makes me drool is the smell of the freshly brewed beans, be it the earthy flavors of Asian varieties or the tangy smoothness of the Latin American persuasion. I look forward to the first sip (which I believe is the best part in the coffee ritual), with both hands holding the cup, inhaling the aroma deeply before letting the flavor wash over my tongue.

I have to admit also that part of the joy of drinking coffee is the time in between the first sip and the very last drop. There is a whole culture that has evolved in relation to drinking coffee and stepping inside a coffeeshop. Actually, that is the whole purpose of this blog; how coffee (and all that comes with it) has revolutionized the way we live

Until then, I leave you with these words from a nameless person who captured perfectly the social phenomenon that is coffee

Over second and third cups flow matters of high finance, high state, common gossip and low comedy.  [Coffee] is a social binder, a warmer of tongues, a soberer of minds, a stimulant of wit, a foiler of sleep if you want it so.  From roadside mugs to the classic demi-tasse, it is the perfect democrat.  ~Author Unknown 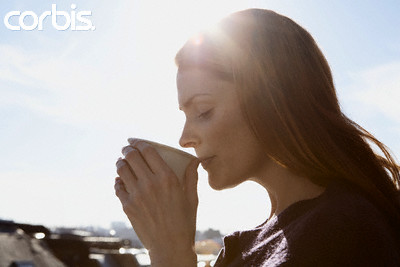